An article written by D.W. "Darkwing" Lee, Executive Director, MABRC.
(Special thanks to Dave "Therealsuperdave" Jett for creating this unique drop box, without him, I don't think I would have ever come up with this great idea.)
About 9 years ago, I happen to talk to the guys from Texlaresearch about their drop boxes they used to place their audio recorders out in the field. 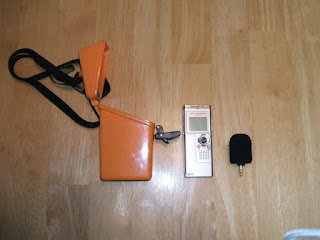 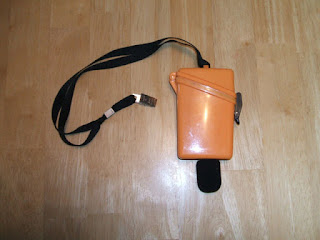 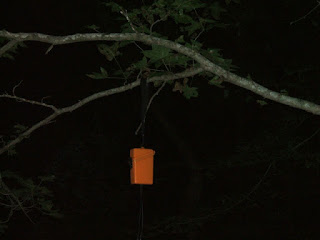 Courtesy of Texlaresearch
They have used these drop boxes to obtain some really great audio, and I learned a lot from these guys, one of the main things I learned, is to just walk along through the woods and just drop off the box and continue going on, not dwelling on the fact you are putting this recorder in place.
The MABRC uses this approach on our audio recorders and guys like Randy "Rebelistic" Savig, Mark "Sawdustt" Newbill, Dave "Therealsuperdave" Jett and Mike "CompresserMike" Hartsell have taken these to a new level with the numbers of drop boxes and the design of them.
One design in particular caught my attention, and with good reason.  On an expedition about a year ago, I took Dave Jett out on a four wheeler to place his new drop box, and I was very impressed.  It was a PVC pipe sealed on one end, with the other end filled with foam rubber to keep the recorder in and a very ingenious hook system that allowed Dave to place his recorder up high above the eye level of even the tallest Bigfoot.
Placing bark around the entire rig, once placed high up into the tree, unless you knew it was there, you would never know it was hanging there above you.
So lets fast forward to January 2017, I had deployed some of my drop boxes out during the MABRC expedition.  These were made out of small tupperware bowls with lids, easily seen at long distances.
Upon reviewing the audio, I was shocked to hear 4 wheelers approach my recorder, stop, and the people dismounted.  They approached the box and you could hear them open the box saying "what the heck is this?".  Then they realized it was recording, they closed the box back.  I came so close to loosing my recorder.
SO D.W., what next?  You may ask?
I took Dave Jett's idea and built two prototypes to use in my areas.  To do this, I needed to buy some items.  While I used a different capping system because my local hardware stores didn't carry what I needed, I have found everything I would require since on Lowes.com, I will be building newer models within the next month.
Here is the list of what you will need:
A substantial length of 2 inch wide PVC pipe  (Most places will sale you smaller sections, but the average is about 10 foot lengths.)
2 inch end caps
Silicone (clear)
eye hooks
washers
nuts
OD Green spray paint
wire clothes hangers
paint extension pole
camouflage masking tape
foam rubber
black tape
Here are photos of what each one looks like for the record (Minus the masking tape, paint and foam rubber) 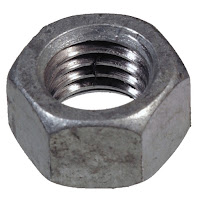 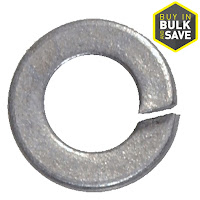 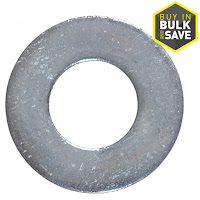 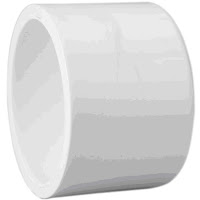 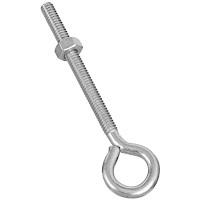 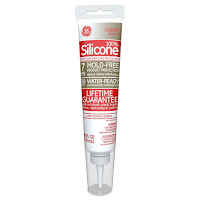 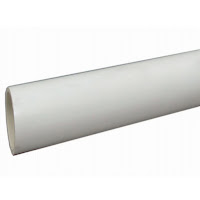 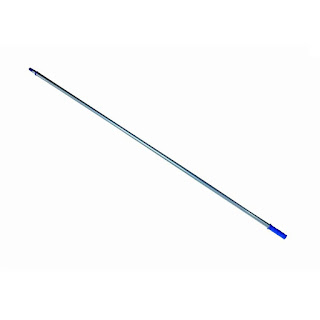 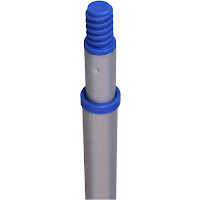 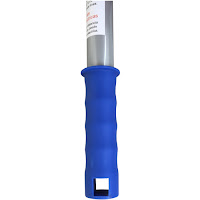 So how does it all go together?  The following photos shows the initial prototype. 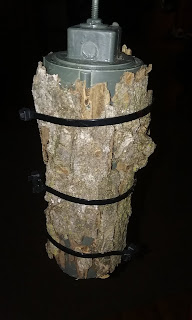 The outside of the drop box, the bark is siliconed on it, but the plastic ties are on there to keep it tight on the box. 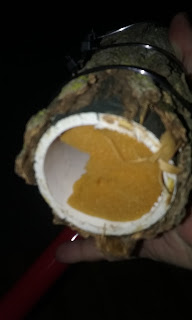 The bottom of the box, notice the foam rubber that is siliconed inside it with a small part cut out just big enough to slide a recorder into. 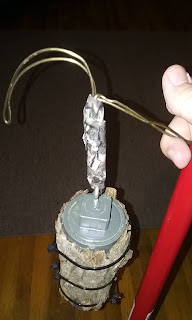 The top of the prototype was a reducing cap and plug, in the future, my drop boxes will use the end cap as shown above in the list of items needed.  The eyebolt is bolted on both sides of the plug to make sure it doesn't wriggle itself loose.  The wire clothes hanger is then bent into shape around the eyebolt to form the hook and the little arm used to put up in the tree. 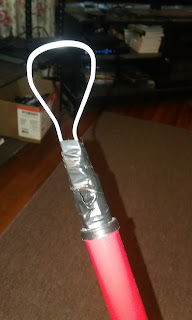 A small part of the clothes hanger can be used to make a metal loop on the end of your pole and secured with black tape. 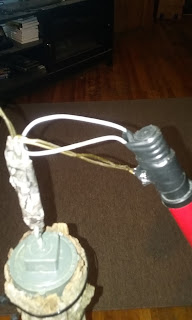 This loop fits over the little wire arm on the hook, and allows you to place it on a tree limb around 15 to 20 feet above the area.
To test out my hope that people would not notice this drop box once it was in place, I took it up to a fellow MABRC researcher's home, and placed two drop boxes around their house.  The researcher's husband was not told the recorders were there, and they were left in place for a week, with him walking by them on multiple occasions at eye level.  It finally took her taking him out there to them and pointing them out before he seen them.
So now, I have a viable option that when I am going down into the research areas on a four wheeler, I can pause long enough to raise my drop box up to a tree limb over the trail, hook it, and continue on, no one or no bigfoot the wiser that I just dropped a recorder off.
In the future, when I begin building the newer drop boxes, I will record the entire process and post it here on the blog.
Once again, I want to say thanks to Texlaresearch and Dave Jett for imparting their knowledge to me.