Never give up!! Never surrender!!!

Never give up!! Never surrender!!! 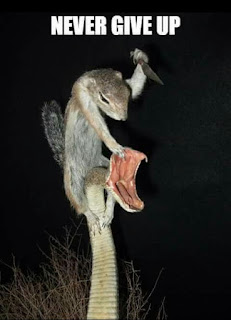 I try not to post anything on this blog to make it into a political blog, as in the Bigfoot Community, there seems to never be a shortage of politics.  But every once in a while, something happens that just boggles the mind so bad, the it eats away at you like the plague until you say something.
Ryan Reading, yes, that Ryan Reading.  He is like the squirrel above, he just never gives up.  To Ryan, the entire Bigfoot community is like a rattlesnake, always ready to strike at him and in his mind, he is the great crusader who must take on the whole community.
Ryan has tried to make comments on this blog, and each time, I have to shake my head why he would think anyone would let him rant and rave on their blogs.  Recently, Ryan has tried multiple gofundme projects, from paying his fines, to buying a thermal, to now, his quest to fund a field trip and gift cards for the 6th graders at the school in his town. 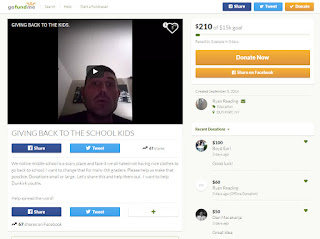 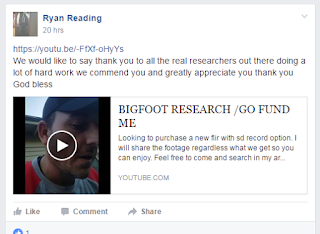 So Ryan wants $15,000 to fund all this for the kids at his local school.  Yet he directs this solely at the Bigfoot community instead of his local community where the local populace should be more interested in taking care of their own community.  When the Bigfoot Community balks at the whole idea because Ryan is associated with it, he resorts to name calling and bashing of the Bigfoot Community as a whole.  Here are just a few examples of the many that exist out there. 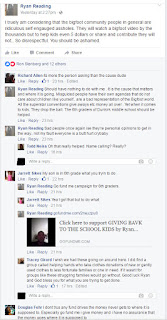 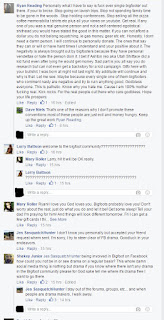 There is more, but we have to keep this post short.  The issue is, Ryan has attacked everyone and tried to portray himself as the victim throughout.  Ryan even admits that he posted this in 88 Bigfoot Sites but never mentions posting his gofundme on non-Bigfoot sites, yet wants to bash Bigfooters because they don't trust the person running the gofundme project to fund these kids.
Todd Neiss, a person I have tons of respect for said it best.  "Bridges burned." 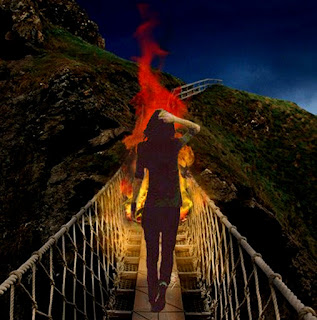 Todd asked questions, and did take offense when Ryan called the entire Bigfoot Community a lot of bad things because they didn't jump on his band wagon on the gofundme project.  Ryan in kind, blasted Todd, finally Todd could take no more of the stupidity that Ryan was throwing out there, including using foul language as if that was the only words he knew.
Ryan then goes and begins posting bible verses on his page as if he is trying to make himself look good to everyone. 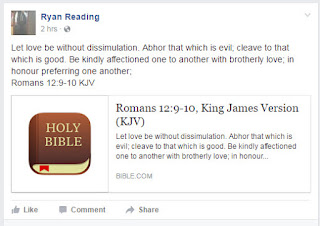 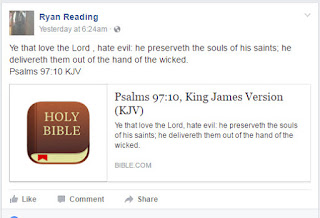 Like this will endear him to anyone???  And then, he posts this. 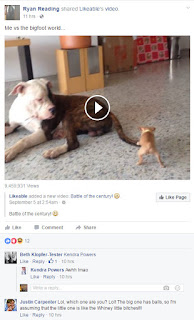 Yeah Ryan, you sure do have the Bigfoot Community by the tail, too bad you are such a small nuisance.  Maybe if the entire community would just ignore you, you would get tired and leave us all alone.  But I'm sure you will rant and rave in your next 45 minute to an hour video about how the Bigfoot Community is so against you.  Maybe it's because we are so tired of your attacking everyone, and making videos that just ramble on and on and heaven forbid, on.
Most people have tried pointing out to you that what you are trying to do best suits your local community, and as such, those who do not live in your area have their own children in their own communities to worry about.  Also, you have zero credibility to be spearheading any fundraiser, and if this was truly a fundraiser for a school, it should be done by the school, not by you.
To hammer away at the Bigfoot Community for not contributing to your gofundme is so laughable, that you are now the biggest joke in the community.  No one is trying to hold you down, you just have burned every bridge you have come to and you have no one to blame but yourself.
But what really blew my mind of what is going on is this....... 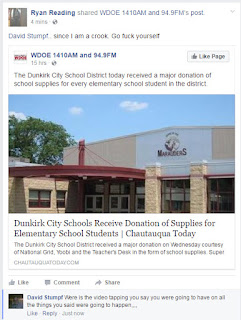 You try to take credit for donations that was made to the school in question that came from National organizations.  What the crap???  You take the cake boy, you had nothing to do with those supplies being donated, but you want the credit for it???
For anyone wanting to donate to this gofundme project that Ryan is behind, do yourself a favor, donate the money to your OWN public school system.  Or better yet, go down to your local Angel tree this Christmas and help out by buying Christmas presents for a needy child there.  Help out in your own community, let Dunkirk take care of their's.  And for those who will no doubt attack this blog for saying what is on the minds of many in the community, go ahead and contribute your money, it's your business and your right to do what you want with your money, but don't attack those of us who are more concerned with the kids in our own communities.