Hoaxing, the worst side of the Bigfoot Community.

Hoaxing, the worst side of the Bigfoot Community.

Recently it was brought to the attention of Bigfoot Hoaxers Exposed 2.0 on Facebook, of a group of individuals in Western Oklahoma who have been perpetrating hoaxes and posting it in Bigfoot groups.

This group thought that no one would call them out on it until they posted an obvious hoaxed photo, that not only was exposed as a log laying on the ground, but several other researchers who knew where the exact location is, come forward to confirm it was a log on the ground.

Here is the photo in question followed up by the two zooms the person that submitted them posted with it. 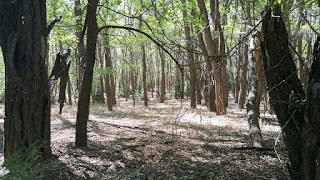 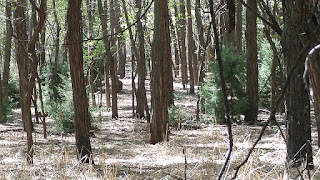 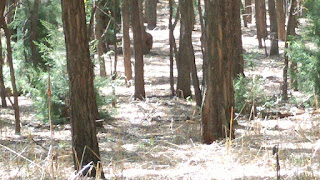 (Photos being used it is placed here under Title 17.
Not withstanding the provisions of sections 106 and 106A, the fair use of a copyrighted work, including such use by reproduction in copies or phonorecords or by any other means specified by that section, for purposes such as criticism, comment, news reporting, teaching (including multiple copies for classroom use), scholarship, or research, is not an infringement of copyright.)
Here is the original post, and it does include the person's name, we do not believe in protecting someone if they are legitimately trying to commit a hoax on people. 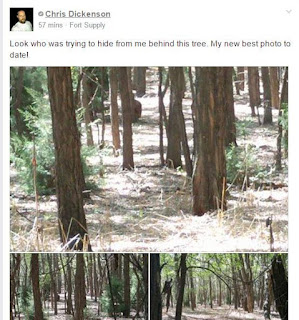 Several folks looked at the photo and concluded that it was the end of a log protruding out from the tree.  When Chris was asked for further clarification, here is how that conversation went. 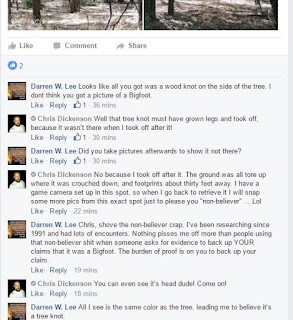 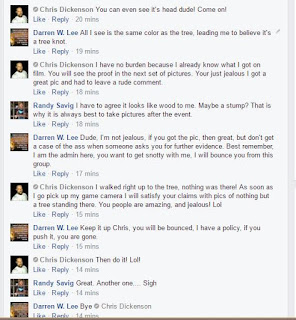 As you can see, Chris got very belligerent when called out on taking comparison photos.  This led him to being removed from the Oklahoma Bigfooters: Research and Bigfoot Sightings group page on Facebook.
Here is what many saw, the second photo shows the red lines where the log is seen extending from behind the log.

It was a log, pure and simple.  But now the kicker, other researchers in Western Oklahoma who had dealt with this guy and knew all about him, know exactly the spot where he claimed this photo was taken, and they confirmed it was nothing more than a log on the ground.
So about a week later, Chris posts what he claims are comparison photos that he took of the spot to quell the jealousy of those who claimed he didn't have a photo of a Bigfoot.  I'm posting them here for people to compare for themselves. 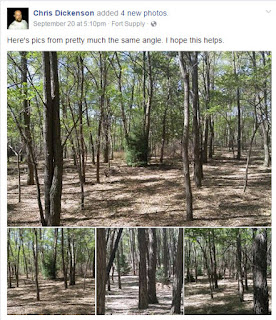 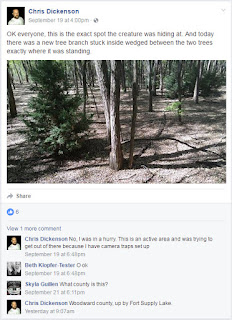 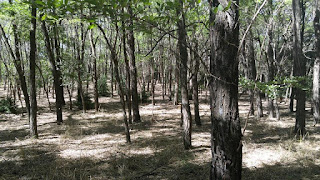 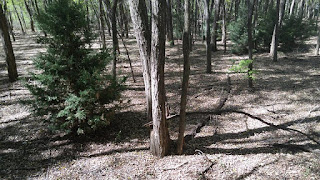 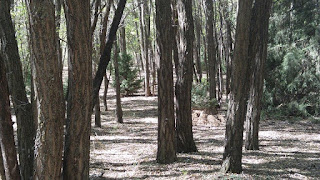 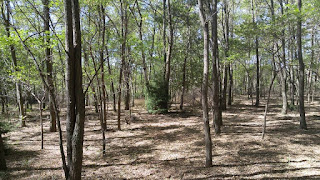 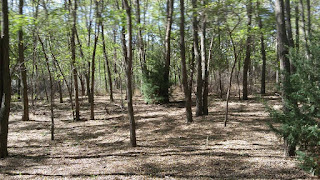 Okay, so you ask yourself, well didn't he go back and take the comparison photos like you asked him to?  Not really, if you look closely at the photos compared to the original one, he conveniently didn't take pictures of the same spot, he moved about 75 feet over to the right and took photos of an entirely different spot.   Chris is hoaxing the entire story and the photos to fit into his story.  He fabricated this story, knew the photos if he took them of the same spot would show it was indeed a log, so he had to take photos of a different location.
For anyone who reads this blog, and you live in the Western Oklahoma area, please be aware of Chris and anyone that hangs with him, they have been caught hoaxing other incidents too.