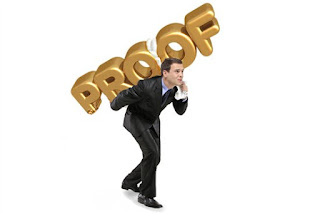 Burden of Proof -
- the obligation to prove one's assertion.

Today's blog is about the burden of proof in the Bigfoot Community.  I see it all the time, someone posts what they claim is a photo of Bigfoot, someone questions them about how do you know it's a Bigfoot, did you take comparison photos?  The person that is making the claim about the photo suddenly gets defensive and screams that they know what it is and everyone that don't believe them can take a flying hike off the cliff.

Let's take a look at the facts here.

The person posted a photo on Facebook to the public at large, making claims that it's a Bigfoot.  This is the assertion of the person who posted it, and accordingly, the burden of proof is their's to show it is a Bigfoot, not the person asking for comparison photos.

This usually ends up causing another issue that creates what is called sheeple. 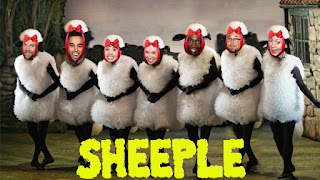 People compared to sheep in being docile, foolish, or easily led.

This is caused by Peer Pressure

In which the person that has posted the so-called evidence has slowly created themselves a following, and once someone tries to question anything related to that evidence, the following/cult members begin piling on, attacking those who ask questions.  Before long, those who tried to maintain independent thought about the evidence and asking questions, are beaten down by these attacks, and eventually fall into the group think mentality.  The free thinker now becomes a sheeple.
So by now, you are asking, Darkwing, what is the point of this blog post.  When I started it, I was going to just talk about the burden of proof is always on the submitter, never on the reviewer.  But the other day I seen where someone asked legitimate questions about evidence submitted online, and when the followers of the submitter seen this, they viciously attacked the person asking the questions, after a day of being attacked, the person finally gave in and fell in line with the rest of the sheeple, refusing to ask any more questions.
I have to say, that is one of the things these days that makes me like going over to the Coalition for Critical Thinking in Bigfoot Research over on Facebook, led by Steven Streufert, this group resembles more of the wolves instead of sheeple. What I mean by that, is they analyze everything with a critical eye, and although this has led them into some rather nasty fights with other Bigfoot groups on Facebook. They don't allow
themselves to be pulled into the sheeple flock. So you should check out the group, but make sure to have a thick skin, they don't tolerate sheeples in the group.